There have been a lot of feels happening over the last few days. People around me are experiencing wonderful and horrible things. It’s funny how this stuff seems to come in waves.

It has left me feeling this odd feeling.  A feeling of wanting to take everyone I love and hug them all a little closer and find ways to protect them from everything and to stop everything I am doing and do all the dream travel I have wanted to do…like surf school in Costa Rica or seeing Paris as a full fledged, employed adult with a greater appreciation for all the delish food.

Deep down, I know that I can’t really do either of those things.  I can’t control what happens to the people I care about and well, I am not independently wealthy.

My takeaway from this, is to simply try my best to embrace life in all capacities. Try to experience more, with people I care about, and do what is best for me, not what anyone else needs/wants. 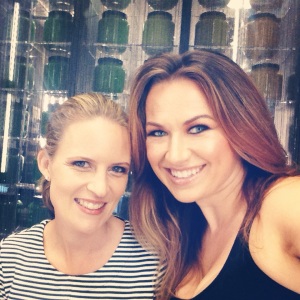 me and my long distance bestie in Hawaii 2014

And on that note, I am going to send an email to one of my long distance besties and schedule a much needed facetime date for the weekend. 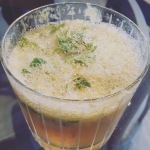 This weekend was a food weekend to end all food weekends.  So much celebrating and based on the scale, it looks like I gained about two pounds.  Needless to say, I’m not too worried about it as this week marks the my return to serious training after a much needed post Manitoba Half cutback week (and yes, I know I still owe a few race recaps).

Friday was a bbq I hosted for a friend’s birthday.  The menu included a festive beverage (see right), some key lime pie and some veggies and rib eyes on the Big Green Egg. 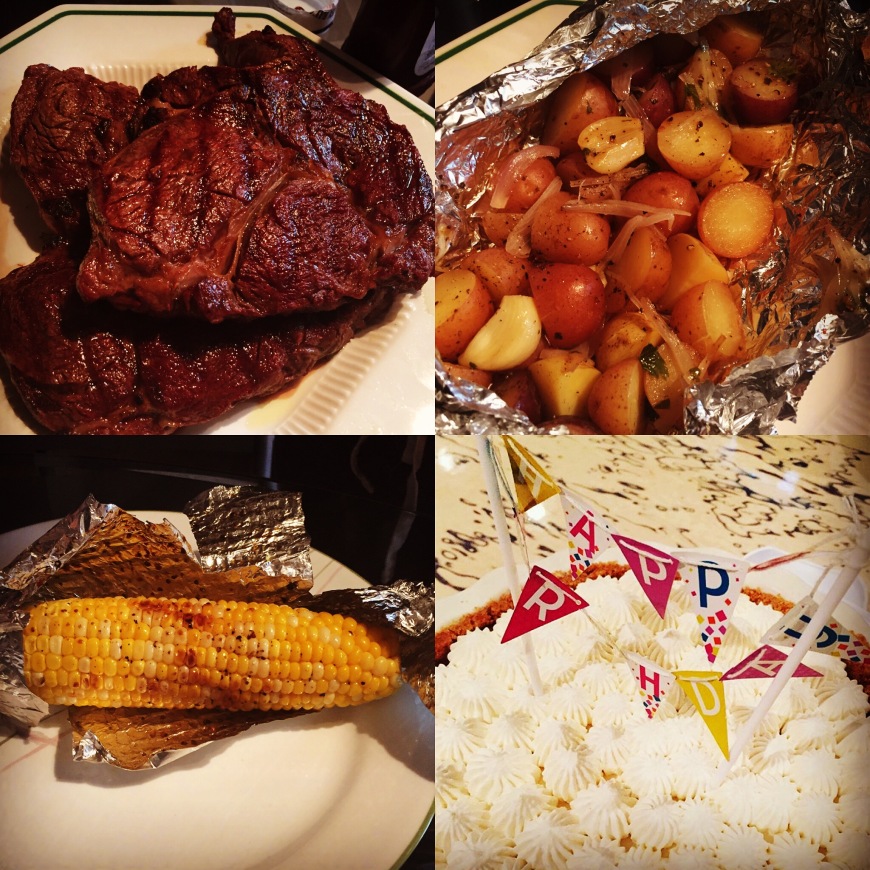 Even looking at this picture again makes me hungry.

The next day I had an impromptu bbq to attend at a friend’s sister’s place.  The friend lives out of town now and decided to host a bbq so she could have a proper hangout with a number of people and they could get to meet her adorable, six month old twins.  I made a rather divine vegan chocolate cake (the host’s son has a nasty egg allergy) with some super decadent whipped chocolate buttercream and a sweetened whipped cream filling.

Finally, I opted to make some macarons with the leftover egg whites from the Key Lime Pie I made.  It was really humid and I wasn’t sure if they would turn out…alas, half did and half didn’t…figures. lol  Keeps me from getting to cocky with my baking skills….though I must say, those macs may have not all turned out, but daaaaamn they are tasty!

So needless to say, it was a busy week in the kitchen, but oh so good. I plan on going on a bit of a baking hiatus so that I can try to shake the last six pounds I want to lose in order to be at racing weight for Dumbo Double Dare in September.  only about 9 weeks to go! 🙂

P.S. I will post some recipes for some of the things I made shortly. 🙂

It is a gorgeous warm day today and well, I can’t think of anything better than an coffee date to start the day off.  I have my coffee in hand (though sadly not in my favourite mug pictured at right).

If we were having a coffee date, I’d ask you about your plans, if you were doing any sort of summer fun, running races or cooking up something delicious.  I’d ask how your partner, if you had one is…how your family is doing.

I would probably ask if you if you had any thoughts on the Brexit vote and if you had ever been to the UK or even Europe in general.  I would probably also lament the impact of the Brexit on the value of the Canadian dollar.May also ask you about local politics if you are the sort that has an interest in it.

I would tell you about my weekend plans – cooking dinner for a friend’s birthday today.  The menu is Filet Mignon, roasted taters and honey sriracha butter grilled corn, with pineapple cilantro mojitos and key lime pie for dessert.  There will also be another bbq, where I will get to see a friend who lives far away and meet her twin babies for the first time.  I will be making some cupcakes for the occasion.  I also have a shorter long run planned of around 10 miles on Sunday but it will likely be indoors due to the weather forecast.

If you were running minded or a fan of Canadian Olympics, I would ask your opinion on Canadian runner, Lanni Merchant and her fight to try and represent Canada in both the 10,000 metre and marathon races.  Here’s an opinion piece from the CBC as to why she should be representing at both.  The main reason the Canadian Olympic folks don’t want her in both is that they feel like she won’t be able to do her best at both, thus decreasing our chance to medal in either, given the events are so close together.  I feel she has earned a place for both and should get to do both.

And now it’s time to get back to work. Thanks for the lovely company and have a great weekend!

It has been awhile since I provided a Run Club update, so I figured today was the day–especially since I also need some advice from readers.

The last 6 weeks have been a bit of a rough month for my Run Clubbers.  There was a lot of germs going around and everyone seemed to be taken out for long periods with colds, flus, infections.  We also have a few people battling some minor injuries, but I am proud to say that the group is still working toward the goal by working with their setbacks by taking rest days when they really need them, doing a long workout when they are feeling energetic or doing alternate activities when running just isn’t possible.

There have also been some success stories coming out of the Run Club.  One member who could only run for about 5 minutes at a time without stopping is up to do running 17 minutes at a time.  Another member who has been battling a severe case of plantar fasciitis is finally on the mend and is starting to run again for the first time since October!

To keep everyone accountable and motivated, I have put out different challenges, with varying levels of success and rewards–the last reward was a jar of Hell’s Kitchen Peanut Butter for the member who had the most workouts for the month.  For May I am hoping to create a individual goal setting challenge that would prepare them for running their first race of the season on June 1.

I want the members to think of three goals fitness related goals for the month.  An “A,” “B,” and “C” goal. “A” is an achievable goal, “B” is a stretch and “C” would be essentially kicking butt and taking a few names. I would like them to also associate three rewards that would fit each level of achievement.

I have done this before for races that I have run–my friend Tara introduced me to this style of goal setting.  Once I read this quote from rock star marathoner Meb Keflezighi, after winning the Boston Marathon on Monday I thought I would extend my method of madness to the group…..

I feel like the quote speaks to working towards the ultimate goal and if you miss that, then there are still great things that you accomplish, despite perhaps not quite hitting that ultimate mark.

So my question–does anyone else undertake this style of goal setting? Did it work for you? Is this too much for new runners?  Do you have any tips for motivating running groups?  If so, let me know in the comments!